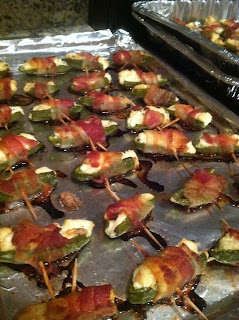 I've received a few marriage proposals lately (though I only accepted one) and a couple of them came after I served bacon-wrapped jalapenos stuffed with cream cheese at a party. The recipe comes from The Pioneer Woman and it is awesome (and inexpensive to make.) I used forty jalapenos and spent about $4 for all of them. I purchased them at Food Rite in Arlington, VA. It is a small market off of Glebe Road that is frequented by ethnic folks. Their produce prices are great. The cream cheese was $1.99 (I got two) and the bacon was $4 a pack and I used two.

Other than toothpicks and gloves for handling the jalapenos safely, there is nothing else you need. I differed from the recipe only in the length of time that the jalapenos stayed in the oven. I baked them for about 35-45 minutes or at least until I thought that the bacon looked browned (no one likes uncooked bacon.) We had over 80 pieces for a friend's New Years Eve party and it was a hit.

My friend Jenny has used the same recipe and added ranch dressing powder and cheddar cheese in the cream cheese. I liked them both ways.