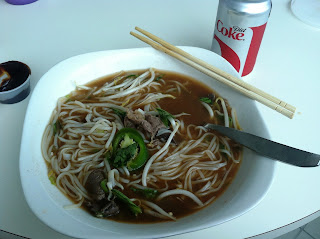 Skimming through my twitter feed in the middle of a work week, I often see a posting that either says "Ugh, I could really use a bowl of pho right now" or "If only there was a pho delivery service."  If you work in downtown DC, the closest quality, soul-warming bowl of pho is in Rosslyn at Pho 75 or in Columbia Heights at Pho 14. (And if you know of a location that has spectacular pho in downtown DC, please leave a comment and let me know where you had it. I have yet to find it.)

The only way for me to have a good bowl of pho for lunch during the work week is if:

The broth is packed separately from the noodles and the meat. The broth is heated up using the microwave and then noodles and meat are placed in afterwards and then microwaved some more though not too much as the noodles expand and suck up the broth and ruin your bowl of pho. This is a delicate process. Plan to hog the microwave from co-workers for at least 15 minutes. Also, prepare to face any wrath for making the office will smell of pho.

Working near a major park where food trucks can park is a big perk.  On a regular basis, I have a variety of great food steps away from my office.  There are three pho food trucks that I have seen around DC; PhoNation, Pho Wheels, and Pho Junkies.

My co-worker Kevin loves PhoNation and regularly visits them on Fridays when they are parked at Farragut Square (which, by the way, if you are in your twenties and single, Farragut Square is a great place to lunch on Fridays. Young folks everwhere. It is like going to club but in daylight. "Hey honey, can I buy you a Curbside cupcake?")

I was really skeptical about eating pho from a food truck but I must admit that the pho from PhoNation is good.  The broth has a strong, beefy flavor and you can taste a hint of spices in the broth.  The noodles are not gummy nor are they undercooked.  PhoNation has a really organized system; noodles are heated up and placed into a plastic container, the meat, onions, and cilantro are added on top, and the broth is kept heated in a dispenser so that it is easy to pour into the plastic container. The basil, slice of lime, slices of jalapeno, and sprouts are packaged neatly in a little baggie for easy pick up. The hoisin sauce and Sriracha chili sauce can be found on the side of the truck where you can pour as much as you like into to-go sauce containers.  The process from ordering, paying, and getting the food is easy and quick.

So until pho shop owners can make like ramen shop owners and open up locations in downtown DC and serve quality bowls of pho, stop by the food trucks and give them a whirl. 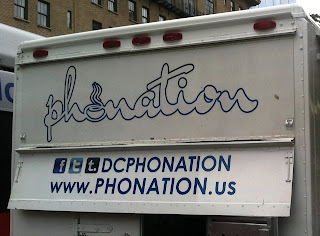 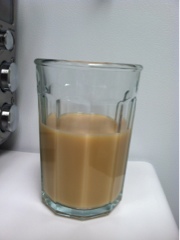 I have become mildly obsessed with Masala Chai Tea and it is all because of Aroma Indian Restaurant in Foggy Bottom. After finishing our meal, my friends ordered some tea while I ordered dessert. They both sighed deeply after taking one sip and exclaimed how delicious the tea was. I took a sip from one of their cups and immediately ordered a cup of my own. The waiter brought out the teapot and I could see the whole spices that were brewed in the tea. Since that dinner, I have craved a cup of Masala Chai tea everyday.
At Trader Joes, I picked up Red Chai Tea bags and brewed a cup once I got home. So disappointing. The tea had very little flavor and barely had a hint of spice. I brewed two tea bags per cup and still found it bland. A friend gave me some Tazo Chai tea bags (the ones used at Starbucks). The flavor was stronger than the ones from Trader Joes but not nearly the heavenly taste of the tea I had at Aroma.
I started asking around to see how people made their teas at home. A friend told me that a friend of hers simply crushes some cardamom pods, brewed them with some Lipton tea, and added milk and sugar.  A co-worker, who visits India often to see his family, told me that making the tea with whole spices is the only way to go. I mentally made plans to visit an Indian market to pick up all of the spices.
Suddenly today, it hit me that I had all of the spices I needed to make this tea. Most of the spices are the same spices I use to make pho. Eureka! 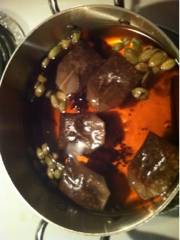 10 cardamom pods, crushed
10 whole cloves
1 anise star
2 cinnamon sticks
4 black tea bags
4 cups of water
Milk
Sugar
Place water and spices in a small saucepan and bring to a simmer. Simmer for 15 minutes. Add black tea bags and simmer for another five minutes. Strain into a tea cup and add milk and sugar to taste. Enjoy.
Posted by Sylvie at 4:07 AM 1 comment: