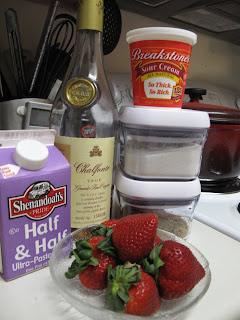 There is something about eating at La Madeleine that I really enjoy. Their food is not that great. It tends to be rich and over cooked. But there is something that is so charming to me about the cafeteria layout and how you get to pick your food out as you walk towards the cash register. The place also is charming to me because it is exactly the kind of place my mom would take me to as a kid. Going out to eat with my mom was always a treat. It didn't happen often so each time we went felt pretty special. La Madeleine is exactly the kind of place she would choose. The pretty pastries displayed at the end of the lunch line was always a draw for her.

At La Madeleine, they have a dish called Strawberries Romanoff. Its fresh strawberries topped with a cream sauce that has a hint of liquor. Strawberries are so cheap right now. At Harris Teeter, they are on sale for $3 per lb. This is an easy to make dessert that is great for dinner parties or potlucks. Its really pretty and really rich tasting but is inexpensive. 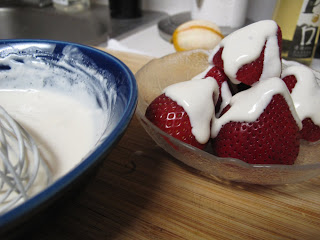 1 cup strawberries, hulled and rinsed - $3 per lb
1/2 cup sour cream - $1 for one cup
1/4 cup of half and half - $2.69 for 16 oz carton
1 tablespoons brown sugar - $1.49 for 16 oz
2 tablespoons of vanilla sugar or white sugar - Free from previous purchase
2 tablespoon brandy - Free when you date a cocktail blogger (Please note that the bottle used for this recipe is $20 and a great tasting brandy. Its named Chalfonte.)

Mix sour cream, half&half, brown sugar, vanilla sugar, and brand together and let stand for 2 to 3 minutes. Dilute sauce with half&half if it feels too thick. Place berries into bowl and pour sauce on top. Serve.
Posted by Sylvie at 3:06 AM 4 comments: 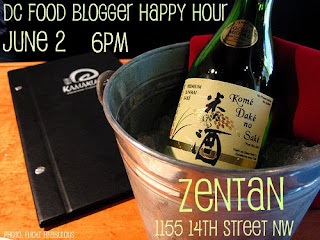 Please RSVP Here!
Posted by Sylvie at 4:24 PM No comments: 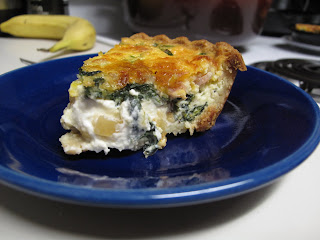 This past weekend, some friends and I celebrated my cousin Stephanie's birthday at Liberty Tree on H Street NE. Afterwards we headed to Dangerously Delicious Pies for something sweet. Walking there, we were all excited. "What kind of pie are you going to get?" I thought about a slice of apple pie, or strawberry rhubarb, or a blueberry pie. My pie cravings usually happen when I watch a movie with an actor eating a slice of pie. Mel Gibson once ate a slice of blueberry pie in a movie and I've been looking for a blueberry pie that tasted as good as I imagined that one tasted.

As we were entering into Dangerously Delicious Pies, one of my friends mentioned they were going to buy an entire pie to take home and eat. Then we saw the menu and the prices. One pie....yes one....cost $30. Thirty one dollar bills. Six five dollar bills. Three ten dollar bills. Thats right...it was more than I WOULD EVER pay for a pie. But since we were there, I got a slice to give it a try ($6.50). Unfortunately, they were out of blueberry and strawberry rhubarb pie. The waitress recommended cherry since it was in season. It was tart. Dangerously delicious? I didn't think so until I finished the entire slice (that must have been 1/5 of the pie.)

Going home, I still felt insulted by the price per pie. Not only that, their quiches were going for $28. It was just wrong.

So I went home and made a quiche. It was good and easy to make...and cost me about half the price.

1. Preheat oven at 375F
2. Whisk cream and eggs together and set aside.
3. Saute bacon until crispy and set aside on paper towels to drain fat
4. Saute onions until slightly caramelized and then add spinach. Season with salt and pepper. Cook until wilted.
5. Build quiche - layer 1/2 of the onions and spinach at bottom of pie crust, spread 1/4 cup of cream cheese on top, place the other 1/2 of the onions and spinach on top, layer on crispy bacon, add cheddar cheese and top off with the green onions.
6. Pour cream and egg mixture slowly into pie crust and only until it its the top of the sides of the crust. (Do not over fill the crust; you may end up having more of the egg mixture than you need.)
7. Place pie on cookie sheet and place in middle of the oven. Bake for at least 40 minutes and when most of the egg mixture has firmed up.
8. Set aside and allow to cool for at least 15 minutes. Slice and Serve.

The cream cheese gives this rich quiche an even amazingly richer taste. It works really well with the eggs and the onions. If you want to make this quiche a bit lighter, you can use milk instead of cream and omit an yoke or two. The quiches are so easy to make and would be really impressive to make for guests for a summer brunch. Just call me Barefoot Contessa.
Posted by Sylvie at 3:23 AM 11 comments: