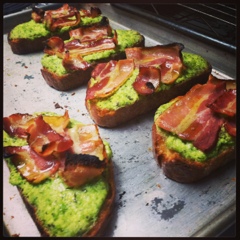 On a trip to Philly awhile back, Marshall and I got to visit a restaurant called Vernick and had one of the best meals we had ever eaten.  The restaurant aims for "simple yet refined cooking" and they hit the nail on the head.  Everything was prepared with careful hands and the presentation was impeccable.  Every dish was memorable.

One dish in particular held a special place in Marshall's heart: Peas and Bacon on Toast.  The pureed peas had a hint of mint and the creamy mixture was spread over toasted, good bread and topped with the thinnest pieces of fried bacon.  Marshall tried to replicate the dish for dinner one night but his experiment didn't work. It didn't have the right amount of mint and wasn't as creamy as what we ate at Vernick.

To Marshall's (and my) delight, Food and Wine Magazine printed the recipe for these delicious toasts and we found out what we missed in the experiment. We didn't have cream cheese.  Cream cheese added a bit of tang and really rounded out the flavor of the peas.  We made the peas and bacon toasts as instructed and we have one edit to the recipe.  It is pretty tough to get bacon cut as thin as they have theirs cut so we suggest frying or baking the bacon until it is crisp.  Then place the bacon on top of the puree and broil it carefully so that some of the fat from the bacon drips onto the toast. Make sure the bacon doesn't burn.  Enjoy.

From Food and Wine Magazine

Preheat the oven to 400°. In a food processor, combine the peas with the butter, cream cheese and the 1/4 cup of mint. Pulse until nearly smooth; season the pea butter with salt and cayenne. Brush the bread with olive oil and arrange the slices on a rimmed baking sheet. Toast the bread in the oven for about 8 minutes, turning once, until lightly golden but still chewy in the center. Transfer the toasts to a work surface; leave the oven on. Spread each toast with about 1/4 cup of the pea butter and top with 3 slices of bacon. Arrange the toasts on the baking sheet and bake for about 10 minutes, until the bacon just starts to render. Turn on the broiler and broil the toasts 6 inches from the heat for about 3 minutes, until the bacon starts to brown. Garnish the toasts with olive oil and chopped mint and serve warm.
Posted by Sylvie at 3:37 AM